Stay Informed!
Click here to stay up to date with news and events! 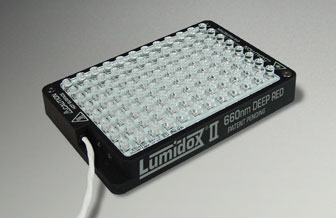 In the midst of academic research focused on deep red/near IR light (wavelengths between 650 – 740 nm), Analytical Sales & Services is pleased to now offer its generation II Lumidox® products in 660 nm and 730 nm versions. By including these wavelengths amongst its offerings, Analytical Sales can reach even more potential applications than ever before.

The use of the near IR wavelength (730 nm) is of particular interest, with one potential application being the driving of a photocatalytic reaction. By utilizing 730 nm IR light in this way, researchers in Germany were able to use polyoxometalates as photocatalysts to synthesize metal nanoparticles (MNPs). This sort of work may hold great implications in the field of nanobiotechnology.

Metallic nanoparticles are highly toxic to living cells. While working with these materials can be considered hazardous to humans, there is potential to use these materials as novel antibiotic agents due to their high level of antibacterial activity. An article in the Journal of Nanobiotechnology summarized and discussed proposed mechanisms of antibacterial action for various MNPs.

Another major application of the 730 nm wavelength is in the field of botanical science. As is commonly understood, the photosynthesis that takes place in most plant life on earth absorbs light from the violet/blue and red ranges. Because of this, most plants appear green to us–since they cannot absorb light in the green range, those wavelengths are reflected back at us and our eyes perceive ‘green.’ Scientists conducting agricultural research investigate the amount of chlorophyll fluorescence and leaf photosynthesis at various wavelengths, such as 680 and 730 nm, as described in Photosynthesis Research.

Another study focused on the distribution of 660 nm and 730 nm radiation in corn canopies. Scientists placed a barrage of sensors throughout and within crops of corn and measured the amount of 730 nm radiation the crops received during various parts of the day. Throughout the middle portion of the day, the amount of 730 nm radiation the crops received was relatively stable. However, during the early morning and late evening portions, when the sun was low on the horizon, they observed an increase in 730 nm radiation, relative to that which was observed midday. Where the 680 nm wavelength is immediately absorbed by the leaves, the 730 nm wavelength scatters, allowing it to penetrate deeper into the corn crop canopy, heavily enriching it. Scientists can now study the implications of these findings by utilizing high-powered artificial 730 nm light, such as the ones being provided by Analytical Sales.

An additional application may be in the field of laser irradiation of cancerous tumors, otherwise known as photodynamic therapy. In particular, one study published in Organometallics focused on the photodynamic therapy effect of iridium complexes by 730 nm continuous wave laser irradiation. This type of research has tremendous implications in the field of cancer research. There is potential for the delivery of an iridium complex via injection to a tumor cell, followed by the application of near infrared (730nm) continuous wave laser radiation, to arrest or even reverse a tumor’s growth. This research is currently being done in-vivo on rat and mice specimens.

Meanwhile, scientists at the University of Wisconsin – Milwaukee have been studying the use of certain wavelengths of light (particularly blue and deep red/near IR) as medicinal therapy. Their research focuses on the ability of near IR light to improve the clinical condition of rodents afflicted with multiple sclerosis (MS). They learned that near IR light can in fact help improve the clinical condition of the rodents. Additionally, they used near IR light on rodents suffering from blindness caused by poisoning, a type of condition thought to be permanent. However, they found that subjecting rodents to near IR light helped them regain some sight. Although their research determined that 730 nm was not the best candidate for phototherapy, more research remains to be done with that particular wavelength.

Near IR light was also found to have wound-healing abilities; the theory is that near IR light heals by ensuring that cytochrome oxidase binds with oxygen to turn on protectors and stimulate cell metabolism. The above article mentions that a possible reason for the near IR light working so well as a treatment is the way that it interacts with free radicals. Free radicals form when diatomic oxygen in the body splits into single atoms with unpaired electrons. These free radicals have a high affinity to bond with other molecules in the body, which causes damage and inflammation. There is a possibility that near IR light helps to reduce inflammation, which encourages healing. In addition, the 730 nm wavelength can be used to measure the activity of antioxidants—a class of compounds within the body which inhibit oxidation and the formation of free radicals—in organic media, as per an article in Redox Report. This makes 730 nm light an excellent candidate for further research as to light’s healing ability, which can be supported by Analytical Sales’ Lumidox II product line.